The Karaga Bearer Symbolizing The Adishakthi Draupadi Adorned Like a Woman.

Adishakti Draupadi is the community Deity of the Vanikula Kshatriya Thigalas, one of the foremost communities in Karanataka. "KARAGA" is the 9 day festival observed by them in reverence to the Goddess. This festival is a major attraction to the people from all walks of life in Bangalore.

The Karaga-bearer himself symbolises Goddess Draupadi and is therefore adorned like a woman. The Karaga-bearer leaves the temple around   midnight adorned in yellow saree, bangles and a mangalasutra ( the chain that establishes the marital status of a hindu woman). The Goddess is brought for the darshan of the devotees from the temple on the head of the Karaga-bearer. The crowd goes beserk trying to catch a glimpse of the goddess.

The Dharmaraya Swamy Temple has been the focal point of this festival since time immemorial. As per the records of the temple, the Royal Highness of Mysore visited this temple in December 1811. The people of the Thigala community formed a temple trust comprising of Gowdas, Ganacharis, Poojari, Gantepoojari who look after the performance of the festival every year. The various days of the festival include "Hasi Karaga", "Petai Karaga" which is also called "Hoovina Karaga". 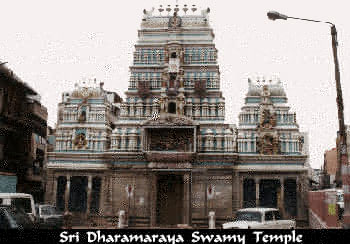 The festival is celebrated "Chaitra Poornima" (The Full Moon day in the month of Chaitra as per the Hindu Calender).

A month or two before the festival, the members meet and discuss about the details of the festivities. After this community elders are invited to discuss and decide the intricacies of the festivities, the date and time it is to be performed. Arrangements are made for the printing of invitations and its distribution.