Here is a narration of how Karaga originated and the history of birth of Adishakti in the form of Draupadi.It is believed that AdiShakti helped the Trimurti (Lord Bhrama, Lord Vishnu, Lord Shiva) in the creation and existance.

Goddess Parvathi the Adishakti one day sees Lord Shiva deep in meditation.She prays to Lord Bhrama to grant her desire to attain Lord Shiva as her husband. Impressed by her dedicated prayer and meditation, Lord Bhrama appears before her.

Lord Bhrama who was stunned into silence recovers himself and replies "Astu (so be it) to all your wishes".

Parvathi asks the Lord Bhrama "Lord, Why is it that when I asked for one boon but you blessed me saying "Let all your wishes be granted"".

Lord Bhrama replies "Mother, please remember that you asked for the same boon five times over".Hearing this reply Parvathi is stunned and askes Lord Bhrama for a solution.

Bhrama tells Parvathi that "Marital relations are for earthly beings and hence only for Earth.I have granted you your wish, now it is upto you to decide whether you want to spend Five Janmas (birth's) with five husbands or to accept the trials and tribulations of being the wife of five husbands in one Janma (birth) and then return to Devaloka (Heaven).

Parvathi replies "Instead of being away from the Lord's presence for five Janmas (birth's), I prefer one Janma (birth)with five husbands. But I want my husbands to be in the image of God and I want to be able to perform righteous tasks while I am on Earth. Lord Bhrama replies "Astu" (So be it) and leaves.

There after King Drupadha peforms a Yagnya. From the Yagnya fire, Adishakthi is born in the form of a baby girl and is named Draupadi. Later she marries the five Pandav brothers, Dharmaraya, Bheema, Arjuna, Sahadeva and Nakula and plays a key role in Mahabharatha and the recitation of the Bhagvad Gita.

Draupadi resided in the hearts of Pandavas and encouraged them to prepare for the mighty war of Kurukshetra inorder to re-establish dharma (righteousness) and justice. 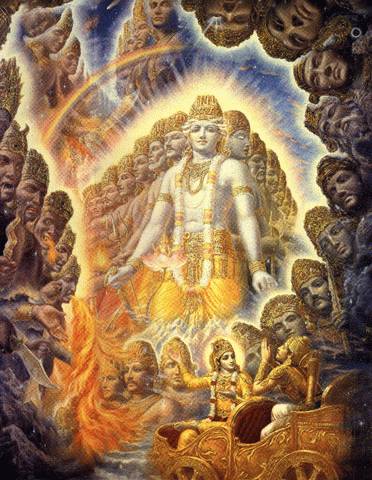 Let us now see how the Vanikula Kshatriya Thigalas came into being and how Karaga binds this community together.

As the Mahabharatha war ended and the Evil was destroyed, the Pandavas and their wife Draupadi were on their way to Kailasha. During the journey Draupadi was lagging far behind her husbands, the Pandavas, thus fell victim to teasing by Timarasura. Taking offence on this teasing, Draupadi revealed the Vishwarupa (Holy Form).As a means to destroy Timarasura, Draupadi created warriors from different parts of her body.

She made Yajamanas from her head, Ganachari from the forehead, Gowda from the ears, Gante Poojari from her mouth and Veerakumaras from her shoulders. These men fought against Timarasura and his warriors and won the war for their Mother Draupadi.

Draupadi insulted by Timarasura's teasing wanted to return to Kailasha in her Divine form immediatly. Seeing this Sri Krishna, came down to the warriors that Draupadi had created and told them "Do not let your Mother desert you,so pray to her". He said to the Veerakumaras "Only you can stop her now".

So the Veerakumaras started hitting themselves wth their swords on the chest and praying "Amma, Dhikuthoru Namage, Dhikuthoru" (Mother, show the way, show us the way).They offered to sacrifice themselves in order to obtain her grace. Seeing this Mother Draupadi's heart melted and she said "Inorder to safe gaurd the righteousness on the face of the earth, I shall be amongst you for three days every year". Then she came back to her human form.This is the reason "Karaga Shakthiotsava" is celebrated every year with fervour.