The Seventh Day of the Festival is Hasi Karaga.

Hasi Karaga takes place near the Sampangi Tank which is one of the oldest tanks in Bangalore. The whole place is decorated with flowers, lights and leaves. The devotees wait for hours together to get a glimpse of the Goddess as the procession takes place.

On this day the Veerakumars, Ganacharis, Gantepoojaris, Poojaris, Kula Purohitha perform poojas near the Sampangi Tank. They clean the entire place, keep ready the pooja items and give a holy bath to the Karaga bearer. Then the Kulapurohitha tie Kankana to Veerakumaras.

The attire of the Veerakumaras are a white colour pyjama along with a red cloth tied tightly around their waist. A golden threaded turban is tied around their heads. A white and red colour nama is drawn on their forehead and hold swords in their hands.

The Hasi Karaga is decorated with red cloth, jewellery and flowers and placed on a Peetha (altar) in the "Mantapa". Along with this a Magical Stick and Knife is also placed. The Karaga Bearer then performs pooja to this. At this time the Veerakumaras burn camphor and Devotees start chanting the name of the Lord Govinda.

The Veerakumaras then start to pray saying "Govindo, Dhik Dhee" which means Lord Govinda(Krishna) "show us the way". They perfrom "Alagu Sevai" in which they hit themselves forcibliy on the chest with their swords.At the same time , amidst burning camphor the Poojaris, Gante Poojaris take a processsion around the altar chanting the name of the Lord Govinda. 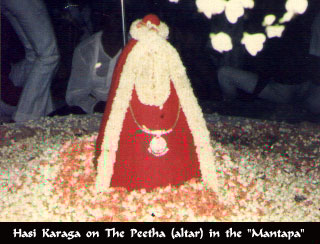 It is believed that the Lord descends on the Karaga Bearer then. The Karaga Bearer then lifts the Hasi Karaga along with the magic stick in the left hand and holds the knife in the right hand. This is a spectacular sight to behold.The people start chanting the name of Lord Govinda and the procession starts off.

The Procession reaches the Shri Dharmaraya Temple early morning where the devotees are eagerly waiting for the Goddess's arrival.

The fast maintained from the previous day is broken by eating the Prasada.